Who Still Advertises On Alex Jones’ Infowars? The NRA

Who Still Advertises On Alex Jones’ Infowars? The NRA

While many major brands are ensuring that their ads do not appear on conspiracy theorist Alex Jones’ YouTube channel, the National Rifle Association is continuing to advertise with Jones.

CNN reported on March 3 that it had “discovered ads on InfoWars’ channels from companies and organizations such as Nike (NKE), Acer, 20th Century Fox, Paramount Network, the Mormon Church, Moen, Expedia (EXPE), Alibaba (BABA), HomeAway, Mozilla, the NRA, Honey, Wix and ClassPass.” Many companies that were running ads on Jones’ YouTube channel told CNN that they terminated the ads after being made aware of them.

The NRA, however, is continuing to run ads, like this one that appeared before a video of NRA board member Ted Nugent’s February 26 appearance on Jones’ show: 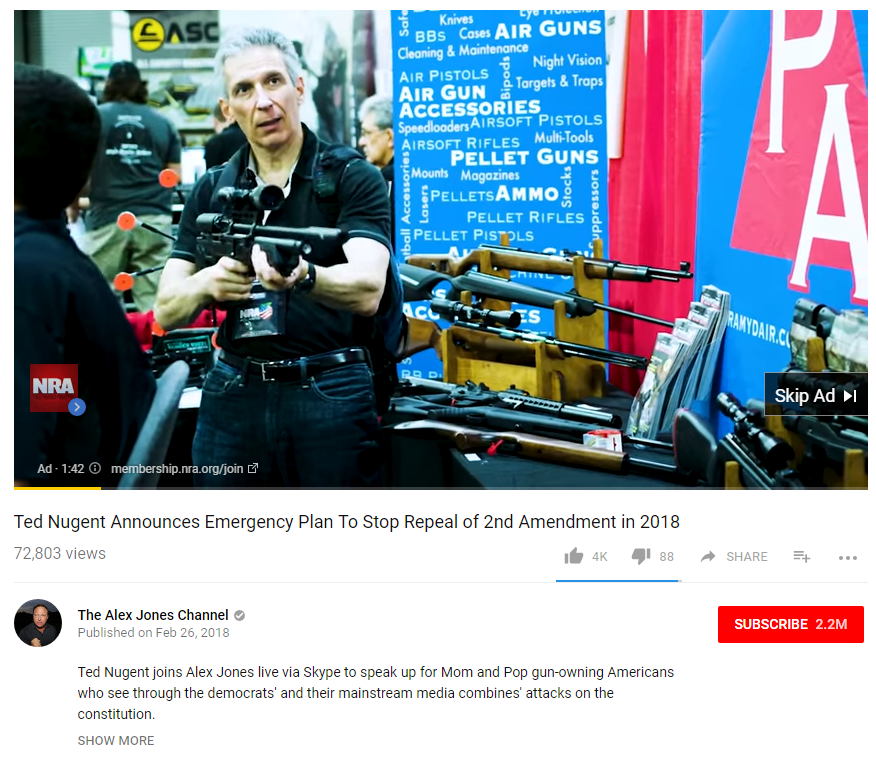 Jones has pushed conspiracy theories about numerous mass shootings, including calling the 2012 shooting at Sandy Hook Elementary School “fake” and a “giant hoax.” Since the mass shooting at Marjory Stoneman Douglas High School in Parkland, FL, last month, Jones has waged a campaign against several student survivors who have spoken out about gun violence, claiming that the students are “Democratic Party operatives” and are “scripted.”

Jones has become a vocal supporter of the NRA since the gun group’s release of a 2017 ad that critics say was an incitement to violence against critics of President Trump. Following the Parkland shooting, Jones invited Nugent on his show to make an NRA membership pitch. This past weekend, Jones visited Nugent at his house; he says he will broadcast footage of that interview this week.